Today, it's my pleasure to have as my guest, Amy Korman, author of Killer Holiday to talk about her new book...

When my editor at Witness Impulse/HarperCollins suggested to me that the fourth book in my Killer Wasps mystery series have a winter-holiday theme, I couldn’t wait to sit down and start writing. Who hasn’t had festive family squabbles, canceled flights, mall parking lot fiascos, and a Butterball turkey timer that just won’t pop when everyone’s starving?

That insane period between Thanksgiving and the New Year is the perfect time for the Killer Wasps characters to solve crimes and enjoy cocktails in my new book, Killer Holiday. It’s December, and antique dealer Kristin Clark is trying to bring in shoppers to her store The Striped Awning outside Philadelphia, when once again, crime invades her quiet town.

Former Mob wife Sophie’s being shot at by a local Santa, and gossipy Bootsie is missing a valuable item—her brother Chip, who’s entangled with shady golf resort developers. Then there’s the super-annoying Eula Morris, the group’s high school nemesis, who recently won Powerball and got a fancy makeover. Unfortunately for Eula, who’s been on a lengthy cruise, a suitcase full of gold she “forgot” to declare at Customs goes missing as soon as she steps off board, and Kristin and her friends are soon helping Eula steal it back. Cocktails, a Christmas cabaret, a break-in, poker games and a road trip to Florida help make this December merry for the Killer Wasps detectives, who also need to decide on important matters like what to eat at their annual Christmas party: Will it be brisket or baked ziti?

At such a busy time of year, it’s a real luxury to escape with a book or a movie, and hopefully Killer Holiday readers will find it lightens their stress for an hour or two. I’m overwhelmed like everyone else at this time of year, so I plan to curl up with Hercule Poirot’s Christmas, watch Christmas in Connecticut for the millionth time, and I’ll definitely be mixing up a batch of Bootsie Delaney’s favorite holiday drink, the Bourbon Blitzen. Thank you so much for reading Killer Holiday!

It’s December 15th, time to mix up the holiday cocktails in tranquil Bryn Mawr, PA. Then a Samsonite full of gold goes missing, Bootsie’s not-so-bright brother Chip is kidnapped, and shady lawyer Scooter Simmons is offering investors shares in a fake golf resort. For antiques dealer Kristin Clark and her friends, this Christmas is murder…. 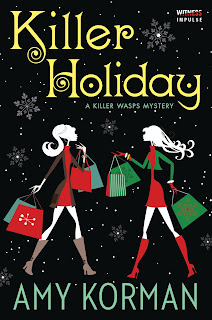 Kristin Clark and her offbeat crew of Bryn Mawr socialites are ready for a fun and festive winter holiday—one that involves sipping martinis by a crackling yule log, hot guys beneath the mistletoe, and Gucci under the Christmas tree. But this year, Old Saint Nick has something more dangerous in store. A stranger dressed in a Santa suit has Kristin’s friends on his naughty list. First, Sophie’s favorite handbag is blasted by a bullet. Then, Father Christmas shatters her brother Chip’s car window with a golf club and leaves a threatening note demanding fifty grand. Both are convinced it has to be a mistake. But when Chip goes missing, the stakes become deadly. Eula Morris is also back in town for the holidays, more bossy and boastful than ever after winning a mega-jackpot in the lottery. She’s returned from a luxury cruise around the world with a handsome new boyfriend (who looks oddly familiar…) and a Samsonite suitcase filled with gold bars. When the suitcase is snatched, Eula implores Kristin and the team to track it down. Where is Chip? Why is a vengeful Santa targeting the gang? Who stole Eula’s suitcase? And how are these events linked? The WASPs and Kristen’s basset hound Waffles are on the case—before this white Christmas turns even darker…


Bootsie McElvoy burst through the front door of The Striped Awning, a bag of ice in her right hand and the biggest bottle of Maker’s Mark bourbon I’ve ever seen in her left. She dug into her L.L. Bean tote for a bottle of red wine, a shaker of nutmeg, and a bag of fun-size candy canes, all of which she deposited next to a display of 1940s barware near the front of my antiques store.

“Kristin, it’s December fifteenth, which means it’s time for you to start offering shoppers a specialty cocktail the minute they set foot inside your store,” Bootsie told me. “I’m going to mix up a batch of the Delaney family Christmas drink, the Bourbon Blitzen, which never fails to produce a White Christmas vibe. One sip and you’ll feel like you’re singing and dancing with Bing Crosby and Danny Kaye at a snowy Vermont inn. This should double your sales totals for the month.”

“Thanks!” I said gratefully, since Bootsie’s family’s boozy drinks are known throughout our village of Bryn Mawr, Pennsylvania, for their potency and tendency to produce unwise purchases.

“The drinks sound good, but you’re also going to need about four thousand more of these pinecones, triple the greenery, and eight hundred additional strands of lights,” Joe Delafield informed me; he’d arrived twenty minutes earlier to help me decorate my store for the Christmas rush.

To lure in passing foot traffic, I’d brought in armloads of holly and spruce branches from my backyard (cost: free, thankfully), spray-painted pinecones silver (the paint was only $5.28 at the hardware store), and added some cheerful-looking blinking white lights. This would probably bring tons of holiday shoppers through my front door!

Joe paused, eyeing the room with his signature critical stare. “The effect I’m going for is that a bunch of HGTV-crazed elves with subscriptions to Veranda magazine snuck in and decorated for four straight days. Gerda, we’re going to need the blinking lights to stop blinking, pronto. Pull the plug, please.”

Joe’s assistant for the day was the eponymous owner of Gerda’s Bust Your Ass Gym, which is housed inside the beauty salon across the street. Since Gerda stands a lofty six feet tall in flats (or sneakers, which is her usual footwear, since fancy shoes aren’t her style), she’d agreed to hang ornaments, bringing her signature grim attitude to the proceedings.

“Cute idea,” Bootsie observed, casting a dubious stare at my front window, which was filled with antique silver-plated candlesticks, flatware, and wineglasses. “Is that your holiday inventory?”

“Nobody going to want that stuff,” said Gerda, who moved here from her native Austria a few years back. Gerda, who’s incredibly muscular and brings in sell-out crowds at her Pilates classes, isn’t the most tactful person in the world. “People want, like, scarves and Fitbits and iPhones.”

I sighed, knowing Gerda was right. Those were the gifts on most holiday wish lists.

“Luckily, I’ve solved all your problems,” Bootsie told me. “I ran into Eddie from the Pub this morning, and he needs a place to hold some late-night poker tournaments this month, so I brokered a deal for The Striped Awning. You’ll be hosting twice-weekly games from 10 p.m. till 1 a.m., Tuesdays and Thursdays till Valentine’s Day.”

“What!” I erupted, alarmed by this idea. “First of all, that doesn’t sound legal.”

“It’s fine,” she told me, waving away my concerns. “I mean, it’s not like it will be a professional betting operation. Eddie’s limiting each night to ten players and three hours. Some cards, a few drinks, a few small wagers. What could go wrong?”

“A lot!” I said. “They’ll blow cigar smoke and drop Dorito crumbs everywhere. Not to mention get arrested for operating a casino without a license. A lot could go wrong!”

“You worry too much,” Bootsie informed me dismissively. “Plus, he’ll pay you two hundred dollars a night.”

I opened my mouth to respond, but no words came out. Bootsie knew she had me—there’s no way I can refuse an extra four hundred dollars a week, even if it puts me on the wrong side of the state gaming commission.

Just then, though, the front door was thrown open by one Sophie Shields, a tiny blonde who at the moment was looking slightly wild-eyed.

“Ya won’t believe what just happened!” shrieked Sophie. “The Colketts were helping me put up curtains in my new dining room, since Joe here never finished decorating my place—and the curtains are orange silk, by the way, they’re totally Elle Decor meets a J. Lo red-carpet gown. So Tim and Tom Colkett were talking paint colors when I heard a horn honking, so I opened the front door, thinking it was the delivery boy from the Hoagie House. I figured I’d go out and pay the driver, when boom!

“A guy dressed as Santa leaned out of the driver’s seat of a black SUV that had pulled right up in my driveway and aimed a gun at me and the Colketts!” The Colketts are the town’s leading landscape designers, who’ve lately turned their talents to party planning and interior design.

“Then the guy yelled, ‘Hey, Sophie, this one’s from your ex, Barclay!’ and shot my favorite handbag!” Sophie finished. “I was reaching into it to pay for the hoagies, thank goodness, so it acted as a protective shield. Also, I think maybe this Santa guy doesn’t have great aim.”

We all stared at her for a moment.

“Are you sure, Sophie?” said Bootsie finally. “Because this sounds like BS.”

“Yeah, Sophie, maybe you been hitting the wine bottle today,” seconded Gerda. “I know the Colketts are day drinkers. Maybe you been guzzling alcohol, too.”

“It’s true!” Sophie bleated. “Just look at this Ferragamo satchel! If it hadn’t had gold hardware to block the trajectory of the bullet, me and the Colketts would have been toast!” 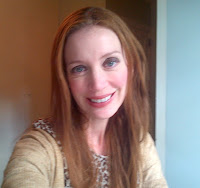 Amy Korman is a former senior editor and staff writer for Philadelphia Magazine, and author of Frommer’s Guide to Philadelphia. She has written for Town & Country, House Beautiful, Men’s Health, and Cosmopolitan. Killer WASPS is her first novel.

Visit the other great hosts on this tour for more great reviews, interviews, guest posts, and giveaways!

This is a rafflecopter giveaway hosted by Partners in Crime Virtual Book Tours for Amy Korman and Witness Impulse. There will be 3 winners of one (1) eBook copy of KILLER PUNCH by Amy Korman. The giveaway begins on October 23 and runs through December 3, 2017.