Blog Tour and Review: ICED: A Resort to Murder Mystery by Avery Daniels

ICED: A Resort to Murder Mystery

Synopsis
Julienne has her ideal job as an event planner at a prestigious resort. During a luncheon event she coordinated, a renowned celebrity pastor is killed next to the buffet. All eyes turn to her as the suspect. If she wants to stay out of jail or even keep her job, Julienne needs all the help she can get to solve the crime.

She has her work cut out for her with a vengeful high school rival now reporter, the public demanding she be fired, plus family who knows what’s best for her, and a boyfriend who doesn’t understand her. She turns to friends and a new ally to uncover who wanted to put the pastor on ice.

Julienne goes undercover and investigates a local swingers group as she follows the trail of clues before they go cold. Can she gather enough suspects and motives to convince the police to widen their investigation? Can she do it before the killer sets his murderous sights on her? Will her personal life ever be as simple as unveiling a murderer? 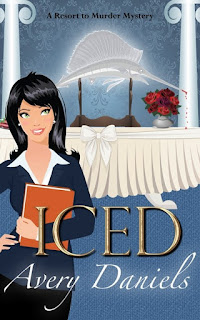 Review
Julienne can't seem to catch a break - she's the prime suspect in the Pastor's murder, she breaks up with her boyfriend and he doesn't waste any time finding a replacement, and she isn't too sure about the dashing new neighbor Mason. Unable to do nothing, Julienne is collecting evidence, and as is often the case in a murder mystery, uncovering sordid secrets about the Pastor. Luckily for Julienne, she has an alibi when someone else is murdered with her name tag as the calling card.

There's a lot to be said for the story line and Julienne is a likable character. I never had a neighbor as attentive or charismatic as Mason. It's easy to see how this could have a sequel or be a start of a new series. The resort certainly has a lot of promise.

About the Author
Avery Daniels was born and raised in Colorado, graduated from college with a degree in business administration and has worked in fortune 500 companies and Department of Defense her entire life. Her most eventful job was apartment management for 352 units (plenty of fodder for stories there!). She still resides in Colorado with two brother black cats as her loving companions. She volunteers for a cat shelter, enjoys scrapbooking and card making, photography, and painting in watercolor and acrylic. She inherited a love for reading from her mother and grandmother and grew up talking about books and history at the dinner table. Her first try at writing a fully developed story was as a teen was a tale of a girl trying to nurse a fawn back to health and then release it into the wild again. She is plotting her next Resort to Murder novel and struggling over which Colorado resort should be her setting
Author Links