HER BROTHER IS NO BARGAIN 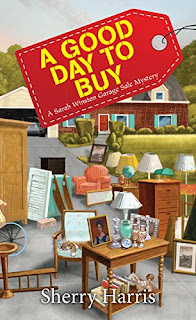 When Sarah Winston’s estranged brother Luke shows up on her doorstep, asking her not to tell anyone he’s in town—especially her ex, the chief of police—the timing is strange, to say the least. Hours earlier, Sarah’s latest garage sale was taped off as a crime scene following the discovery of a murdered Vietnam vet and his gravely injured wife—her clients, the Spencers.

BUT IS HE A KILLER?
All Luke will tell Sarah is that he’s undercover, investigating a story. Before she can learn more, he vanishes as suddenly as he appeared. Rummaging through his things for a clue to his whereabouts, Sarah comes upon a list of veterans and realizes that to find her brother, she’ll have to figure out who killed Mr. Spencer. And all without telling her ex . . .

Sarah is still working things out with her ex - who happens to be the police chief - and getting her garage sale business off the ground. The attack on the Spencers during the garage sale and the sudden reappearance of her estranged brother add to her otherwise complicated life. When it looks like Luke is the prime suspect, she works to find out who killed Mr. Spencer.

Sarah is a likable well-developed character - she has mixed emotions, lots of conflicting thoughts, but what she wants are the answers - who killed Mr. Spencer and what has her brother been doing all these years. The plot thickens with another duo who have a political agenda. The story moves along at a steady pace and the ending includes a bit of a surprise.

This is part of a series, but easily can be read as a stand alone.  It was a fun read and I've added the first in the series to my TBR list - glad to find another author to read.

Agatha award nominated author, Sherry Harris, started bargain hunting in second grade at her best friend’s yard sale. She honed her bartering skills as she moved around the country while her husband served in the Air Force. Sherry uses her love of garage sales, her life as a military spouse, and her time living in Massachusetts as inspiration for the Sarah Winston Garage Sale series.