Synopsis:
Asked to accompany Mrs. Roosevelt on her Pacific Island tour, Agnes and Katherine travel by train to Washington, D.C. Agnes carries a package for Colonel Farthingworth to President Roosevelt.

She meets Irving, whose wife mysteriously disappears from the train; Nanny, the unfeeling caregiver to little Madeline; two soldiers bound for training as Tuskegee airmen; and Charles, the shell-shocked veteran, who lends an unexpected helping hand. Who will Agnes trust? Who is the Nazi spy?

When enemy forces make a final attempt to steal the package in Washington, D.C., Agnes must accept her own vulnerability as a warrior on the home front.

Can Agnes overcome multiple obstacles, deliver the package to the President, and still meet Mrs. Roosevelt’s plane before she leaves for the Pacific Islands?

Mrs. Odboddy: Undercover Courier is a hysterical frolic on a train across the United States during WWII, as Agnes embarks on this critical mission. 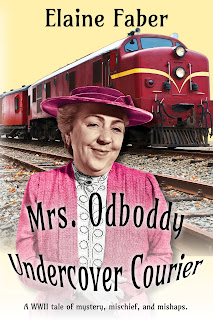 Mrs. Odboddy is at it again, and still seeing Nazi's and spies everywhere. She isn't too sure who to trust and and Katherine isn't the only one who's wondering about her mental health. Katherine becomes a bit more of a believer when it appears someone is trying to steal the package though she really doesn't want Irving to be a spy. Charles comes to her rescue, the package is delivered but with an unexpected twist.

As with the first in the series, there is a touch of nostalgia about WWII with growing concerns and a desire to get the boys home safely. This is a fun, quick read and Mrs. Odboddy carries the show. 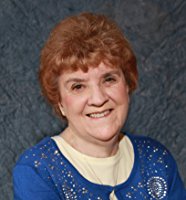 Elaine Faber's short stories are published in magazines and multiple anthologies. She is an active member of Sisters in Crime, Inspire Christian Writers and Cat Writers Association.

Black Cat's Legacy, Elaine's debut fantasy cat-mystery novel., is the first in a series of three Cat Mysteries involving Thumper, who solves mysteries with the aid of his ancestors' memories.

Elaine lives in Elk Grove, CA, with her husband. They share their home with four house cats, and usually more, counting those at the door night and morning looking for a hand-out.

Mrs. Odboddy - Hometown Patriot is the first in Elaine's WWII humorous mystery series. Mrs. Odboddy fights the war from the home front, seeing conspiracies and spies around every corner. When Mrs. Roosevelt comes to town to attend a funeral, Agnes Odboddy's fears become a reality and she must prove she is, indeed a hometown patriot.