The only thing worse than a ship overrun with Elvis Impersonators is having to find the missing one. And the killer is out to find you.


When Elise Pepper decides to take a long overdue vacation, she discovers that her Caribbean cruise isn't going to be quite the relaxing trip she'd hoped for.

Instead of enjoying a quiet getaway, she finds herself in the middle of a theme party. Who knew there were so many Elvises and Marilyn Monroes in the world?
But when an Elvis goes missing and it turns out he was a wealthy philanthropist Elise is dragged into the mystery as the last person to see him.

As she tries to convince everybody of what she saw, her frustration turns to fear when she realizes that she's trapped on board with a killer who will stop at nothing to silence her.

So drop into the cozy cafe and have a doughnut and a sip of lemonade. See for yourself that living in the country isn't always about the quiet life but sometimes is filled with riveting suspense and deception with second guessing right to the end. 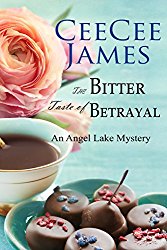 Elise needs some healing (from the ex) and her best friend Lavina has just the solution - a relaxing cruise in the Caribbean.  Only the cruise has a theme and isn't very quiet. Besides Elvis impersonators, there's the cabin steward and the deck hand, the Captain, and a general cast of questionable characters. When it looks like the wealthy Elvis who latched on to Elise maybe minutes before, has disappeared, Elise and Lavina try to sort out what's happening on this cruise.

This was a fun read and the cruise setting was played well. The Elvis/Marilyn Monroe theme added to the story. This is the second in the Angel Lake Mystery Series: Walking Calamity Mysteries. It can easily be read as a stand-alone, but you might as well enjoy them all.