Wedding bells are ringing at the Richmond Telegraph, and maid of honor Nichelle Clarke is determined to give her friends the perfect fairytale beginning to their happily ever after. So when a corpse crashes rehearsal weekend, Nichelle ditches her wedding coordinator shoes for her crime reporter ones, and a little poking around turns up a big problem: the victim and the groom have a history, and it’s not a pretty one. 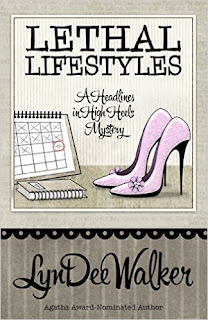 Evidence against groom Grant Parker piles up, leaving Nichelle wishing a hostile bridesmaid was still her biggest worry as she tries to fend off Richmond’s favorite TV reporter—and her own scheming publisher. At odds with the cops, her beloved editor, and the ticking clock, Nichelle races to uncover the truth and save the day before this perfect wedding turns into a funeral.

Nichelle has taken care of all the details for the perfect rehearsal weekend and wedding at this beautiful setting. Before it all gets started though Hulk finds a body and Nichelle overhears conversations that have her wondering what else is going on. All the evidence points to Grant Parker; even Bob is sure Parker is guilty. Nicelle works hard to keep ahead of her arch rival (and keep her job) while not putting Grant in the story.

In the meantime, Joey keeps telling her to be careful with hints of mafia involvement surrounding Sammons and the Generals baseball team.  The romance between them, Joey's connections, and his concern for her safety is a subplot, along with Nichelle's relationship with her ex-boyfriend. Nichelle is a great character.

The story is well-plotted and well-paced. There is always something going on - if not directly related to Burke's murder, there is a tie in somewhere. This is the 6th in the series, but it can be read as a stand alone. As with any series, though, I'd suggest you start at the beginning so you have a sense of the changes in the characters and relationships. I'd recommend this book (and the series) to anyone who enjoys cozy mystery with a little romance.

LynDee Walker is the author of the national bestselling Headlines in High Heels mystery series, beginning with the Agatha Award-nominated FRONT PAGE FATALITY

The newest book in the series, LETHAL LIFESTYLES

Before she started writing mysteries, LynDee was an award-winning journalist. Her work has appeared in newspapers and magazines across the U.S.

She adores her family, her readers, and enchiladas. She often works out tricky plot points while walking off the enchiladas. She lives in Richmond, Virginia, where she is either playing with her children, working on her next novel, or admiring beautiful shoes she can’t wear.