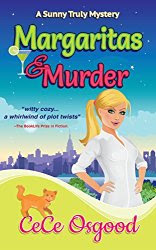 When a long ago childhood friend is found dangling in a tree—with a dead man in her apartment—Sunny is hired to prove the friend innocent of murder. Frumpy, earnest and stubborn, Sunny goes undercover as a glam-girl to ferret out suspects at the club where her friend worked. With the aid of her wise-cracking boss, Cleve Haylock, and swoon-worthy police detective John Rock, Sunny uncovers an ugly secret with deadly consequences. Will Sunny be the next victim?

This is the first book in the Sunny Truly series released on September 9, 2016. Sunny Truly is an apprentice PI with Haylock Investigations.  Cleve has taken her under his wing much to the dismay of his assistant. It is a small group that focuses more on alleged infidelities than murder, but when childhood friend Joyce is found dangling from a tree, is in a coma, and the prime suspect for the murdered man in her apartment, Sunny manages to get Cleve's son to agree to investigate and clear Joyce.

Despite her name, Sunny Truly is not ditzy. She follows leads, asks questions, and finds out more than is safe for her to know, both with Joyce's case and the alleged cheating wife case she's been assigned. As expected, Detective Rock isn't pleased with her involvement, concerned for her safety. Osgood created characters who have some depth - you like the ones you're supposed to like, and as with Sunny, you wonder who can be trusted.

This was an easy read. The plot moves along nicely with the necessary twists. The end has some surprises...  I'm glad to see this is a series - I'll be looking for the next Sunny Truly mystery.

Author CeCe Osgood Invites You To Austin, Texas – the setting of her new book

In the first book of the series, MARGARITAS & MURDER, Sunny Truly discovers her soon to be ex-husband has ruined her teaching career by posting to YouTube a (semi- naughty) video taken during their honeymoon.

Upon divorcing her skunk of a husband, Sunny returns to her home town, Austin, and is hired by Haylock Investigations and stumbles into new career as a private investigator. Soon she is smack dab in the middle of a murder case involving a childhood friend, good ol’ rich Texas boys, high-maintenance wives and flirtatious cops.

I decided to set the mystery series in Austin where I lived for many years. Back then, Austin was a sleepy little college town. And its claim to fame was the imposing pink granite Texas Capitol

building which was modeled on U.S. capitol in Washington D.C.  The only hi-rise buildings in the city used to be the state capitol and the Tower for the University of Texas at Austin.

But that’s not how it is these days. Austin is considered one of the top three fastest growing cities in the U.S. One reason is the fast-growing tech industry which has made the city a Tech Hub like Silicon Valley.

Another element is the increasing population since many students attending the University like living in Austin so much they don’t move away when they graduate. 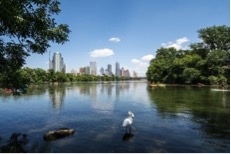 One major attraction is the city’s recreational lifestyle. Bikers, hikers, joggers and walkers are devoted to the hike and bike trail that meanders along Lady Bird Lake (which used to be known as Town Lake).

Back in the 1970s, U.S. President Lyndon Johnson’s wife, Lady Bird, concentrated her attention on beautifying parks, especially the one which now bears her name.

Nine bridges span the lake and one, the Ann W. Richards Congress Avenue Bridge, houses a colony of bats estimated to be over a million.

It’s quite a sight to see the bats swirling around as they leave home on a summer night (especially when they’re wearing itty bitty cowboy boots … just kidding).

Music is another reason for the city’s popularity. SXSW (South By Southwest) is the film and music festival that has was created Austin’s reputation as the Live Music Capital of the World.

Award-winning filmmakers, Joel and Ethan Coen, started out in Austin with their debut movie BLOOD SIMPLE.

Austin also claims filmmaker Richard Linklater whose directing debut was the 1991 indie movie SLACKER, which was inspired by Austin’s past hippie culture and the grad student misfits who stuck around the city instead of actually graduating from UT and moving on. The movie was nominated for the Grand Jury Prize Dramatic at the Sundance Film Festival in 1991.

Also in that movie was a Texas bit player (Girl in the Blue Pickup) who later in her career uttered the unforgettable line, “You had me at hello” to Tom Cruise in JERRY MCGUIRE. But she most famous and beloved as the ditzy and wonderful Bridget Jones, Renee Zellweger.

Ah, the circle comes around and we’re back to chick lit! Yay!

Next up for series is MERLOT & MURDER: The Sunny Truly Mystery Series – Book 2

About the Author: CeCe Osgood

CeCe Osgood lives in Texas after many years in LA working in the film industry. Her writing career includes magazine articles and screenplays as well as being a freelance story analyst (main client HBO). She also has had two screenplays optioned. Being a novelist has been her lifelong dream, and now it’s becoming her reality. She loves red wine and hates pretzels.

CeCe’s first novel, THE DIVORCED NOT DEAD WORKSHOP, a chick-lit romantic comedy about a dating workshop during a cruise to Cabo was awarded a Crowned Heart for Excellence by InD’tale magazine.