Today I am pleased to have Suzanne Burke, author of a children's book trilogy, as my guest.  If you are a dog-lover like me, you will enjoy this post (and probably the books!)

A Dog Inspires a Children’s Book Trilogy, by Suzanne Burke

I never planned to be an author, but a greyhound changed all that ten years ago! In 2002 I decided to adopt a “rescue dog” and remembered Zeus, a greyhound who had crossed my path on Thanksgiving day years earlier in a most unusual way as an escaped greyhound. I helped a young girl safely capture Zeus hours after escaping from his backyard. This event inspired me to look more into the greyhound as a pet. I did some research on the Internet and found a local adoption group in Dallas, Texas, Greyhound Adoption League of Texas, and met my first greyhound, Allie who I eventually adopted.

After experiencing this wonderful intelligent, regal and docile breed, I became hooked. I jumped into volunteering and fostering with the Greyhound Adoption League of Texas to help retired racing greyhounds. I never anticipated that a dog would change my life so dramatically, but a greyhound named Sam entered my life in 2005 in the most unexpected way and what he taught me was so life changing that I had to tell others so, they too, would know a secret that would lead to a much more abundant and happy life. 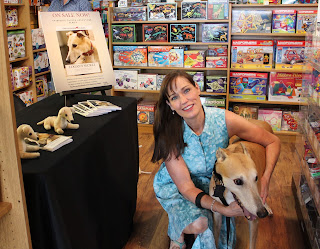 Sam was a large, sweet fawn colored male greyhound with a positive and confident air. He loved everyone! In the Spring of 2005, Sam escaped from his foster home through an open backyard gate. I became involved with his search and rescue effort that would last six weeks. This effort was a true test of patience and faith for many volunteers who spent countless hours posting missing dog flyers, and searching through woods and brush in a lake community in Dallas, Texas. It was amazing to watch a community come together through this lost dog. Everyone knew of Sam. Volunteers searching for him never gave up hope of finding the beloved greyhound.

As a last resort, five weeks into the search a huge humane trap was set up at the edge of a wooded area in the lake community in hopes of capturing Sam. Volunteers were scheduled to replenish the trap with the most alluring food possible morning and night only to find wild animals caught each morning. One morning a raccoon and her babies were caught and of course released. It was a true test of patience, ending in frustration each morning when Sam did not appear.

One evening a volunteer and I were scheduled to bait the greyhound trap. As we finished our chore and took a rest on a park bench to watch the sun set, we noticed a unique formation of a large fluffy cloud in front of the sun. It wasn’t just any formation, but one I will never forget. The cloud shaped before our eyes in the form of a greyhound’s head with its unique long needle nose and relaxed ears. We wondered if the cloud image had significance and both of us walked away that evening with a feeling that something was about to change. 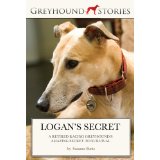 Logan’s Secret tells of this true-life story told from the canine’s perspective. It is about a dog that wanted nothing more than to know a home filled with love, warmth, and happiness. Sam experienced unbelievable challenges and odds to find his forever home. And it was his story that inspired me to begin writing. This is a delightful book with a happy ending where a greyhound with one wish for a loving forever home comes true and is given the new name of Logan. Through the illustrated story, Logan teaches readers about the art of positivity, decision making, and perseverance like no human or dog before.

The book became popular with dog lovers and children and I was asked to write another story about Logan. An idea was formed, and I started a book series teaching children (and adults) about the different historical periods in which greyhounds held importance. The stories are illustrated time travel historical adventures to periods such as Ancient Egypt and Medieval Europe to peak the interest of readers to not only teach important social issues, but also history lessons.

Logan and the Mystical Collar which is the second illustrated book in the series, teaches not only lessons about bullying and courage, but also historical facts about Ancient Egypt in an interesting and fun way for children and adults. In August, 2015, Logan and the Mystical Collar was awarded dual medals in the 2015 Global E Book awards, one of which was for “best illustrated children’s story”.

Book three in the trilogy, titled The Rise of the Phoenix, is in production and is expected to launch the first quarter of 2016. The Rise of the Phoenix, set in Medieval Europe, is an exciting adventure that includes Logan, a wizard, a large imposing dragon, and Tess, a royal greyhound, who are brought together to save a kingdom from an evil black mist that has plagued the countryside and threatens all of humanity. There are clues on Logan’s collar that lead the team to unlock the mystery of a 500 year old secret – the phoenix, which is their only hope to annihilate the killer black mist. Look for this richly illustrated story to be launched on Amazon.

More stories are on the horizon to teach important life lessons and history for readers. Logan’s Secret and Logan and the Mystical Collar are available on Amazon.com in both print and Kindle versions. To learn more about the stories, the greyhound’s history, and about this breed as a pet, visit http://www.greyhoundstories.com.
Brief bio and links for Suzanne Burke

Suzanne Burke, a native of Richmond, Virginia currently lives in a suburb of Dallas, Texas, with her retired racing greyhounds. She has more than ten years’ experience working with the greyhound breed as a volunteer for the Greyhound Adoption League of Texas. Suzanne also has more than 15 years’ experience in the information technology field in project management and technical writing.

Logan and the Mystical Collar http://www.amazon.com/Logan-The-Mystical-Collar-Adventures/dp/1490992421/ref=pd_bxgy_b_img_y