Blog Tour: THE SOUND OF MURDER by Cindy Brown

“This gut-splitting mystery is a hilarious riff on an avante-garde production of ‘the Scottish play’…Combining humor and pathos can be risky in a whodunit, but gifted author Brown makes it work.” – Mystery Scene Magazine (on Macdeath)

All Ivy Meadows wants is to be an actor. And a private investigator. Plus she’d really like a pair of clean underwear, a place to stay since her apartment burned up, and to overcome her fear of singing in public. Also, she’d really like to knock the socks off the big New York producer who’s coming to Arizona to see her in the world premiere of The Sound of Cabaret—featuring singing nuns and Berlin burlesque—at Desert Magic Dinner Theater.

Ivy’s cast mates come through with singing lessons, a pair of granny pants, and a housesitting gig in a retirement community. And her P.I. uncle even assigns her a real case. But all is not raindrops on roses. During her investigation, Ivy clashes with the local posse, stumbles upon a firebug and a snoring pug, and finds herself smack in the sights of a serial senior-killer.

Review
If you have a love of theater and mystery, you can't help but enjoy Ivy Meadows and her friends in the SOUND OF MURDER. The characters are well developed and well rounded. They may lack in sophisticated crime solving skills, but their quirky personalities make for a fun read - it's hard to not at least smile as Ivy muddles along as both singer and PI. Brown's knowledge of the theatre comes through. This is an easy read, with humor and plot twists to keep the story going. It can be read as a stand alone, but I think I'll go back and read MACDEATH before the third in the series comes out next year. 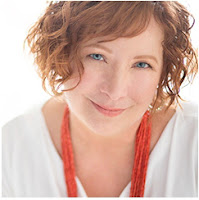 About the Author
Cindy Brown has been a theater geek (musician, actor, director, producer, and playwright) since her first professional gig at age 14. Now a full-time writer, she’s lucky enough to have garnered several awards (including 3rd place in the 2013 international Words With Jam First Page Competition, judged by Sue Grafton!) and is an alumnus of the Squaw Valley Writers Workshop. Though Cindy and her husband now live in Portland, Oregon, she made her home in Phoenix, Arizona, for more than 25 years and knows all the good places to hide dead bodies in both cities.