This first blog on the tour is to introduce you to Stevie Turner, a British New Apple Book Award winner and Readers' Favorite Gold Award writer of 'A House Without Windows' and also ten other novels and short stories. Stevie has recently completed a 53,500 word manuscript, which was accepted for the Kindle Scout Programme. Kindle Scout is reader-powered publishing for new, never-before-published books. It’s a place where readers help decide if a book gets published. Selected books are published by Kindle Press and receive 5-year renewable terms, a $1,500 advance, 50% eBook royalty rate, easy rights reversions and featured Amazon marketing.

Every book has 30 days to earn your nomination. When you discover a book that you think is great, nominate it and the book will be added to Your Nominations panel. Keep up to three books nominated at a time, and update your nominations whenever you want. When a book’s 30-day campaign ends while in Your Nominations panel, your nomination is tallied and removed from your panel – freeing up that nomination for another book. You will receive an email to let you know whether your book has been selected for publication. As a thank you from us and the authors you support, you will receive an early, free copy of all the Kindle Scout books you nominated that are published. Continue to champion the books and authors you helped bring to life by leaving reviews and sharing with friends.

Stevie's Kindle Scout campaign features her manuscript of 'The Donor', a Women's Fiction novel focusing on the relationship between two sisters, Clare and Isabel Ronson. Clare meets the love of her life, singer and guitarist Ross Tyler, at the 1970 Isle of Wight festival. Emotions run high when Clare brings Ross home to meet her parents, but instead she realises he is attracted to her sister Isabel. The attraction is mutual, and when Isabel and Ross eventually marry, the resulting jealousy and hatred Clare feels for her sister looks set to last a lifetime. However, in 2002 tragedy occurs and Ross, now a wealthy tax exile and living in France with Isabel and their children, arrives on Clare's doorstep with a heartfelt plea...... 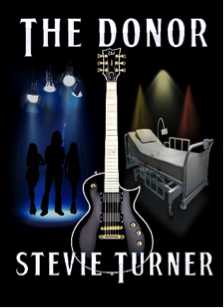 If you would like to help Stevie in her quest to receive a Kindle Press publishing contract, please vote for 'The Donor' by clicking on her Kindle Scout campaign link below. Stevie's campaign runs until 11th October 2015, so there is still one more week to vote!


Stevie lives in the East of England with her husband Sam, and previously worked as a medical secretary. She is now a full time writer. She can be contacted on the following social media:

Thank you for supporting Stevie's campaign. Just like the wheels on a car, 4WillsPublishing keeps you moving forward!

Cover design is by Y Correa at All Authors Graphic Design.

To participate in the Rafflecopter