A ghost in Colonial dress has been wreaking havoc at an old plantation house in Virginia. The house is owned by Elizabeth Smithwood, the best friend of Ellen’s Aunt Mary. Mary is determined to fly to the rescue, and Ellen McKenzie has no choice but to leave her real estate business and new husband to accompany her. Who else will keep the old girl out of trouble? When Ellen and Aunt Mary arrive, they find that Elizabeth’s “house” comprises three sprawling buildings containing all manner of secret entrances and passages, not to mention slave cabins. But who owns what and who owned whom? After Monty—the so-called ghost and stepson of Elizabeth’s dead husband—turns up dead in Elizabeth’s house, suspicion falls on her. Especially when the cause of death is a poisoned glass of syllabub taken from a batch of the sweet, creamy after-dinner drink sitting in Elizabeth’s refrigerator. Monty had enemies to spare. Why was he roaming the old house? What was he searching for? To find the truth, Ellen and her Aunt Mary will have to do much more than rummage through stacks of old crates; they will have to expose two hundred years of grudges and vendettas. The spirits they disturb are far deadlier than the one who brought them to Virginia. Murder by Syllabub is the fifth book of the Ellen McKenzie Mystery series. 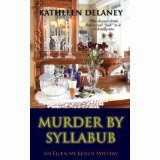 Review:
The story is set in Colonial Williamsburg in a plantation home.  Ellen and her Aunt Mary have arrived to the plantation at the request of Aunt Mary's old friend, Elizabeth. Elizabeth is afraid the house is haunted and there's some concern as to how well she is coping with her husband's death.  Then the "ghost" is found dead - by a serving of a traditional dish the Elizabeth had made for her arriving guests.  Ellen and Aunt Mary get bits and pieces of plantation history and family history and try to put together what someone is looking for among the secret tunnels that make up Elizabeth's home. Interesting characters, fast pace, and lots of secrets make this an interesting read.  Although part of a series, this book can be read as a stand-alone.