Lacy Steele will do anything to help a friend, even if it means defying her boyfriend's wishes to follow someone halfway across the country. Though she knows she's doing the right thing, she's unprepared for the harsh climate and sobering truths she's about to face. How can she be certain her friend isn't a murderer when everything she knows about him is a lie? 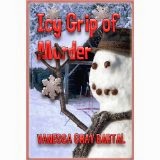 And how can she be certain that she isn't the next to die? When an arctic blast begins to turn everything upside down, Lacy and someone close to her will change in ways she never imagined. As she deals with the strange new behavior, danger begins to mount. How can she prove her friend's innocence in light of so much evidence? And how can she keep the people she loves safe when everyone she meets has a motive for murder?

As a Lacy Steele fan, I was glad to see the 7th in the series available (and only $.99 on Amazon).  Lacy takes off for Minnesota against Jason's wishes to help her friend Michael prove himself innocent of murder.  In the meantime her sister Riley is about to give birth and Lacy's mother is of course on her case to be there for Riley and Tosh.  The story unwinds in true Lacy Steele fashion, with the usual hiccups, twists and turns along the way.  Minnesota has strange effects on Lacy, and equally as strange effects on Jason once he follows her to be sure she stays out of trouble.  This was distracting, but thankfully not permanent!  I'm hoping there is #8 in the future!

AMAZON
GOODREADS
Posted by Christa Nardi at 12:00 AM