About Murder Backstage
When murder propels him backstage, Haydn is forced to confront a deadly killer. . .
When the Burgtheater’s impresario unexpectedly meets his maker, Joseph Haydn is relieved to learn no one expects him to look into the matter. The impresario was murdered—and the Salzburger believed to be the killer is already behind bars. 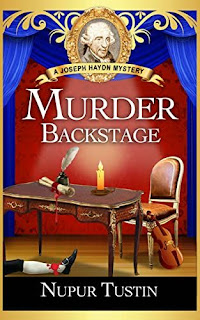 But the impresario’s untimely death is not without consequences. Haydn’s employer insists he take over the dead man’s duties. Handling the tedious technical details of putting on an opera is bad enough. Confronting the suspicious behavior backstage is even worse.
Is an innocent man being sent to the gallows? Haydn is plagued by the question when his brother Michael confirms his worst fears. The Salzburger arrested for the murder is none other than Leopold Mozart—father of the well-known child prodigy currently in Vienna.


Now, egged on by Michael—a close friend of the Mozarts—Haydn must prove Leopold innocent. Or risk his brother’s ire forever!

Praise for the Joseph Haydn Mysteries:

“A standout in the genre of historical mysteries . . .” – Midwest Book Reviews

A former journalist, Nupur Tustin misuses a Ph.D. in Communication and an M.A. in English to orchestrate mayhem in Joseph Haydn’s Austria and to paint intrigue in her Celine Skye Psychic Mysteries about a psychic who takes on the outrageous and still unsolved Gardner Museum theft! In addition to being a storyteller and avid mystery fan, Nupur is a wife and homeschooling Mom who’s recently become a Christian.