A late-night call is all it takes for rookie lawyer Corrie Locke to kiss her day job at the movie studio goodbye, and do what she does best: flex her sweet P.I. skills and go undercover to find a senior who’s missing from a posh retirement community. One small stumbling block: skirting past security to gain inside access to the exclusive Villa Sunset. 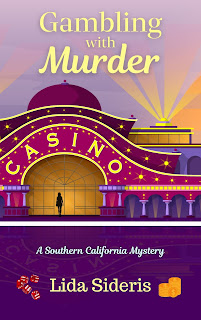 Time to call in the heavy artillery. Besides former security guard turned legal assistant—now wannabe P.I.—Veera, Corrie relies on a secret weapon: her mother, a surprisingly eager addition to Corrie’s team. Armed with enough pepper spray to take down a band of Navy Seals, Mom impersonates a senior to infiltrate the Villa, Corrie and Veera in tow. Turns out the job’s not as easy as they’d thought. These seniors have tricks tucked up their sleeves and aren’t afraid of using them.

The action gets dicey when the missing senior case turns into attempted murder by a criminal mind who’s always one step ahead. Corrie’s hot on the trail, but finds more than she bargained for…when her mother becomes a target.
Review
Corrie Locke is an attorney in the entertainment field, but with her father's influence she also aspires to be a PI. Veera helps her out when there are props missing and Corrie tries to find them. Then she gets a call to help find someone missing from a senior community in Santa Barbara - a very exclusive community and a paid PI job. As would be expected there are complications, more than missing props, and many close calls. To get inside, Corrie's mother joins Corrie and Veera in their PI endeavor. That only adds additional tension.
The story is well-written with snappy dialogue, tension, and humor. Corrie and Veera are likable characters, with Corrie the more adventurous. Then there's the geeky, tech-savvy boyfriend. The story is well-paced and Sideris adds twists and turns that kept me reading.
This is the 5th in a series, and I always recommend readers start at the beginning of series. That said, I've only read one other in the Southern California Mystery series and this was easily read as a stand alone. This is an enjoyable cozy mystery series. The rest of the series will be on my TBR list.
FTC Disclosure: I received a complimentary copy of this book in the hopes that I would post an honest review. This has not affected the content of my review in any way.
About the Author 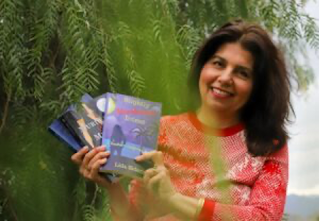 Lida Sideris' first stint after law school was a newbie lawyer's dream: working as an entertainment attorney for a movie studio...kind of like her heroine, Corrie Locke, except without the homicides. Lida was one of two national winners of the Helen McCloy Mystery Writers of America Scholarship Award and a Silver Falchion Award Finalist. She lives in the northern tip of Southern California with her family, rescue dogs and a flock of uppity chickens. To learn more, please visit: www.LidaSideris.com
Author Links
Website www.lidasideris.com
Facebook https://www.facebook.com/lidasideris
Twitter @lidasideris
Instagram @lida_sideris
BookBub https://www.bookbub.com/authors/lida-sideris
Purchase Links - Amazon
a Rafflecopter giveaway