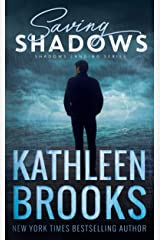 Gavin Faulkner was the only doctor in the small South Carolina inner coastal town of Shadows Landing. He was used to patching up everything from fishing lures stuck in skin to gator bites. Nothing could surprise him anymore—except when he found an unconscious woman partially submerged near his dock after a fierce thunderstorm.

Ellery St. John’s last memory was of a bat swinging toward her head. The next thing she knew, she was cold, wet, and a sexy man was pressing his lips to hers. Too bad it turned out to be CPR instead of a passionate kiss.

Gavin thought Ellery would be safe in the small town where BBQ wars were the biggest danger, but he was wrong. Now it was up to him to help Ellery put the pieces together in order to discover who had tried to kill her and why before they both ended up at the bottom of the ocean.

A small town mystery, this time in coastal South Carolina. Gavin has quite the catch when he finds Ellery. He wasn't looking for her, but someone else is and plans to finish the job. Gavin isn't a cop, a detective, FBI, or CIA. He's your basic small town doctor, the kind you'd like to run into back when doctors made house calls. The rest of the people in Shadows Landing are pretty nice as well. are as nice as he is.

If you've read the more recent offerings of the Forever Bluegrass series by Kathleen Brooks, you've had a glimpse of the cousins in Shadows Landing.  In Saving Shadows, you get the rest of the story, suspense, and romance. As a fan of the other series she's written, this one did not disappoint. I'm looking forward to reading the rest of this series.