Blog Tour and Book Review: ALL DONE WITH IT A Dreamwalker Mystery by Maggie Toussaint


A Jane Doe jogger homicide near the swamp mystifies Dreamwalker Baxley Powell. The petite woman carried no ID, and no one recognizes her. Worse, a shadow passes from the body to a deputy, rendering him unconscious. The deputy and the corpse are dispatched to the hospital and morgue, respectively.

With summer heat and pending childbirth on her mind, Baxley’s dreamwalks into the spirit world fail to yield leads, frustrating Baxley and her deputy husband, Native American Sam Mayes. Days later, Jane Doe’s description matches a missing Mississippi woman. Turns out, her new husband is missing too. Jane’s sketchy brother-in-law and her aunt arrive, full of secrets. At Jane’s campsite, the team encounters a terrifying anomaly, nullifying Baxley’s senses. With such danger present, they must protect their unborn child. No more dreamwalks will occur until Baxley gives birth.


When her friend Bubba Paxton vanishes, Baxley sights him in a mirror, trapped between worlds with other souls. Meanwhile, the shadow invades other hosts, demanding to see Baxley. Mayes and Baxley ignore the shadow as they rescue Bubba, untangle the Jane Doe case, and handle missing persons reports.

To free the trapped people, Baxley must outwit a powerful foe. Can she stop this super villain before he steals her soul?

In this 7th Dreamwalker Mystery, female sleuth and psychic crime consultant Baxley Powell works a homicide case that leads straight to an evil force in the spirit world. The stakes? Her soul, her unborn child, and humanity’s freedom.

Baxter has to deal with more than Jane Doe's story, the phantom who keeps taking over people. She's focused on her unborn son, who appears to have some of her and Mayes' talents. Then there's hints from her mother that maybe her parents won't be around. And the rose tattoo. Lots of tension, but the motivating factor is to free all those running continuously in nowhere.

This is the 7th in the Dreamwalker series. The plight of the characters is resolved in this book. In that respect, it is a stand alone paranormal cozy mystery. However, I suspect without reading at least some of the previous ones in the series for the history of Baxter's powers,  and her fearless ghost dog, her backstory with Rose, and where Mayes fits in, the reader may not catch all the nuances.

Complication and obstacle after obstacle, Baxter stays the course. There are some interesting, and humorous, twists in the story. If you like paranormal cozy mysteries, this one has it all. If you've read others in the story and loved them, you will not be disappointed. 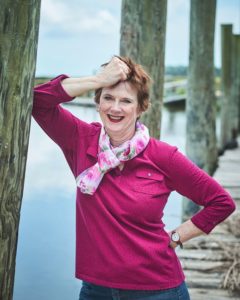