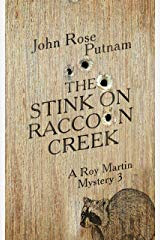 In book three of his Roy Martin Mysteries, bestselling author John Rose Putnam takes on a very troubling problem and comes out smelling like a rose.

Summer doldrums and a severe heat wave combine to cause a slump in business for the Laurel County Sheriff, leaving Roy Martin free to investigate the complaint of a terrible odor along the remote and once idyllic Raccoon Creek. What Roy finds there is a sinister conspiracy to force Ernestine Walden, a charming elderly woman, to leave her lifelong home so that they can develop the land along the stream for a handsome profit. The plotters have already shown a ruthless determination to get what they want, including at least one cold-blooded murder.

Sheriff Roy Martin wouldn't usually investigate a complaint about a smelly creek, but there's not much else to do and that's just who he is. Mrs. Walden isn't kidding and he immediately smells more than just bad air. The tension rises as he starts to ask questions about the way sewage is diverted - it's not supposed to end up in the creek. Before long he's asking more questions and is very concerned that Mrs. Walden may be in danger.

I like Roy Martin a lot and Putnam's writing style. The story is well-written, with enough detail to give you a sense of the time and place, with twists and tension to keep the story moving. This is the third in the series, and it can be read as a stand-alone mystery. As with the other two, I highly recommend this book to anyone who likes mystery, small towns, and historic bent. I'm hoping there's a number 4.