Newly minted lawyer Corrie Locke has taken a vow of abstinence. From PI work, that is. Until her best friend Michael finds his bully of a boss stabbed in the back after confronting him earlier that day. Michael panics, accidentally tampering with the crime scene…which could lead the cops to Michael instead of the real culprit. He turns to Corrie to track down the killer. She doesn’t need much coaxing. Her late great PI dad taught her the ropes…and left her his cache of illegal weaponry.

They return to the scene of the crime, but the body’s missing. Racing against time, Corrie dredges a prestigious Los Angeles college in pursuit of clues. All she finds are false leads. Armed with attitude and romantic feelings toward Michael, Corrie dives into a school of suspects to find the slippery fugitive. Will she clear Michael’s name before he’s arrested for murder?

Corrie has her hands full fighting her attraction to Michael while trying to help him stay out of jail.  She's using all the skills her father taught her as a PI.  And then there's their friend, James and some other interesting characters. Corrie's determined to find the body and the murderer only her PI skills aren't quite polished. Her interactions with the cleaning crew and her belief the body is hidden in the trunk add a few early laughs. In all, this is a fun mystery with some silliness and some nostalgia as Corrie reflects on her father. 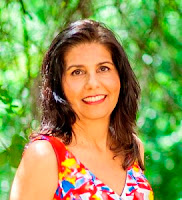 Lida Sideris is an author, lawyer and all around book enthusiast. She was one of two national recipients of the Helen McCloy Mystery Writers of America scholarship for her first novel, MURDER AND OTHER UNNATURAL DISASTERS. MURDER GONE MISSING is the second book in the Corrie Locke series. Like her heroine, Lida worked as an entertainment attorney in a movie studio. Unlike her heroine, she keeps her distance from homicides. To learn more about Lida, please visit her website: www.LidaSideris.com
Author Links