Review: THE POWER OF LOVE AND MURDER (Love and Murder Series #4) by Brenda Whiteside 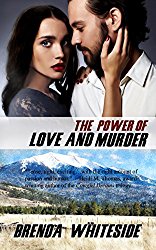 For thirteen years, Penny Sparks has managed to hide from the political powers who murdered her family. When she unwittingly exposes her true identity, not only is she marked for death, but the people closest to her risk meeting the same fate.

Jake Winters is out of rehab and coming to grips with his demons. When he meets his sister’s roommate, Jake believes Penny might be that someone who can help him find life after rock star status…until her secrets blow up his world.

With a government agent turned hit man closing in on her, Penny and Jake race to expose the presidential contender behind the murders of her family. Even if they win the race with death, the murder that stands between them could end their hope for a new life.

A suspenseful read, this is well-written on many levels. Both Penny and Jake are complex characters, both dealing with demons. Jake's sister Mandy took Penny in when she showed up in Flagstaff 13 years before, without even a jacket for warmth, to start a new life. Having lived too much of the good life of a rock star, Jake lands at Mandy's as he is working on starting a new life in recovery. The impending holidays are rocky for both of them. Despite a previous encounter, this time around Penny and Jake connect - until Penny does the one thing her father warned her not to do - try to connect with anyone from her previous life. Now the people who killed her family are after her. The tension is palpable and the pace is steady. Even the secondary characters have depth and there is an emotional charge to their interactions.

This is my first read by Whiteside, but it won't be my last. Although this is the 4th in the Love and Murder Series, it can easily be read as a stand alone.

FTC Disclosure: I received a complimentary copy of this book through NetGalley in the hopes that I would post an honest review. This has not affected the content of my review in any way.