Today, it's my pleasure to have Gillian Baker, author of MURDER OVER MEDIUM, as my guest to talk about vortexes and her book:

No one who’s visited Sedona, Arizona can forget it. Its local art, its jeep tours, its majestic beauty, its vortexes.

My protagonist, Jade Blackwell, responds the same way when her old friend and colleague, Gwendolyn Hexby informs her she moved to Sedona to be close to the spiritual energy of the vortexes. You see, Gwendolyn is no longer a religious studies professor, as Jade supposes. Instead, she’s found a “higher calling” as a psychic medium.

So, what the heck is a vortex? 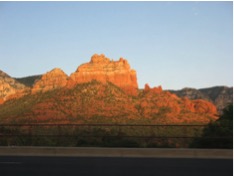 A vortex is a place where large amounts of energy spirals, enveloping everything nearby. It's believed these locations having an energy flow that exists on multiple dimensions, which is why so many seekers visit them each year. Many believe the vortexes intensify meditation, rituals, inner spiritual work, and healing. People flock to Sedona every year, not only to enjoy the beauty of the red rocks and vistas, but to soak up the transformational energy at the various vortexes in the area. Oh, yeah, and to go on a rugged jeep tour.

Sedona has long been a hub of New Age activity. And with four of the most powerful vortexes in the United States within the city limits, it’s not hard to understand why. There are fourteen more within a 10-mile radius of the city also. That’s some powerful spiritual mojo!

Now, depending on who you ask, there are different theories about what causes this spiraling energy. And not just in Sedona, but also surrounding The Great Pyramids, Machu Picchu and Stonehenge.

Here’s a very rudimentary scientific explanation: Vortexes all over the globe exist where there are robust concentrations of gravitational irregularities. Geologists believe the environmental features of Sedona, which transition from mountains to flatland, plays a part in creating the swirling energy centers. The plentiful faults full of magnetized basalt deposits found there are also believed to alter the earth’s gravitational field.
Visitors of the vortexes in Sedona can witness the spiraling energy themselves, even if they don’t believe in any of the woo-woo theories surrounding them. The trees near the different vortexes have had their trunks twisted due to the constant swirling energy under them. Cool, huh? 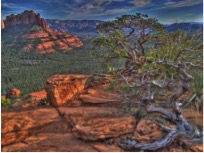 What better town for my psychic medium character to inhibit than Sedona? Gwendolyn, like many before her, felt the vortexes magical pull and was unable to resist. She also understands the old adage, “location, location, location.” More than four million people visit the small town every year, and many of them are looking for higher guidance and an enlightened spiritual journey. Sedona is a great place to be a medium!

When Jade finally gets Gwendolyn to tell the story of her move from professor to medium, this is what she hears:


“One day I met a psychic healer who used this vortex energy to enhance her past life and cellular vibrational healings—some of the deepest soul work possible. She offered me a full weekend of healings so that I could experience them for myself.”

Her broad smile told me this experience had been the catalyst of her transformation even before she put it into words.

“Well, of course, as any researcher would, I took her up on it, and …well, it changed my life. I suddenly had clarity about why I was here on Earth during this lifetime. My fascination with archaic, nature-based religions suddenly made sense. For the first time in my life, I had more than a passing, intellectual understanding of the Sacred. I had experienced and knew beyond any shadow of a doubt that it was Truth. Oh, what a magical time it was! I contacted the university and resigned, never returning from sabbatical.”

“Don’t you miss academia? The research? The intellectual stimulation? I know that’s the part I miss most—there’s always something to learn, analyze and deconstruct.”

“Oh, my dear Jade. Once you experience the Sacred, nothing else can compare. You come alive inside, knowing you are interconnected with all beings. My work now is part of the planetary healing we are currently going through. That’s far more important than writing more scholarly articles on topics only other religious scholars will read. Intellectual stimulation pales in comparison to spiritual stimulation. Everything does.”

Excerpt from MURDER OVER MEDIUM. Copyright © 2017. All rights reserved.

You may ask, do I believe in the magic of the vortex energy? You bet I do! I've experienced it for myself. Totally amazing!

But everyone has to experience it for themselves. If you prefer, you can see the vortex energy as a geological anomaly that you enjoy—people report feeling joyful and at peace while in Sedona. Or, you can go all New Age and soak up the awesome vibe. Regardless, Sedona is a enchanted place everyone should visit. And while you’re there, don’t forget to get a reading with Gwendolyn!

About the Book MURDER OVER MEDIUM - A Jade Blackwell Mystery

Former English professor turned blogger, Jade Blackwell, is enjoying her predictable routine when trouble comes knocking in the form of an old friend and colleague. Unbeknownst to Jade, Gwendolyn Hexby is no longer the successful academic she once knew and trusted—she is now following a new calling as a psychic medium, a contentious career that flies in the face of the logic and deductive reasoning Jade values.

At first, Jade welcomes the visit, but things soon turn bizarre as Gwendolyn brings only disorder danger and disruption. When a murder is prophesied, and a beloved pillar of the Aspen Falls’ community winds up dead, Gwendolyn becomes Sheriff Ross Lawson’s prime suspect.
To get Gwendolyn out of hot water, and more importantly, out of her house, Jade attempts to prove her friend’s innocence. Jade believes she’s finally discovered the truth, but is soon brought back to reality when she learns all is not as it seems in the realm of the metaphysical. Not even murder.

Return to the Jade Blackwell Cozy Mystery Series in Murder Over Medium as Jade jumps into the fray of a territory not governed by logic or reason—in either this world or the next.

Gilian Baker is a former English professor who has gone on to forge a life outside of academia by adding blogger, ghostwriter and cozy mystery author to her C.V. She currently uses her geeky superpowers only for good to entertain murder mystery readers the world over. When she’s not plotting murder for her Jade Blackwell cozy mystery series, you can find her puttering in her vegetable garden, knitting in front of the fire, snuggling with her husband watching British TV or discussing literary theory with her daughter.

Gilian lives in Flagstaff, Arizona with her family and their three pampered felines. In her next life, she fervently hopes to come back as a cat, though she understands that would be going down the karmic ladder.

January 16 – Queen of All She Reads – SPOTLIGHT, GIVEAWAY

January 20 – Escape With Dollycas Into A Good Book – SPOTLIGHT, GIVEAWAY

January 24 – A Blue Million Books – CHARACTER INTERVIEW
Posted by Christa Nardi at 12:00 AM