ON TOUR: SLEEP LIKE THE DEAD BY ALEX GRAY (A DCI LORIMER NOVEL) 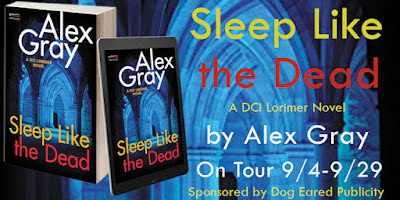 There’s a hitman in Glasgow: unpaid and angry, he’s decided to settle his own debts…

Marianne Brogan can’t sleep. She’s plagued by a nightmare: someone in the shadows, whispering threats, stalking her every move. To make matters worse, Marianne can’t get hold of her brother, Billy. Despite knowing some shady characters from Glasgow’s underworld, Billy’s always been there for her – until now.

Meanwhile, DCI Lorimer and his team are faced with a string of seemingly unconnected but professional killings. Without witnesses or much conclusive evidence to build a case, the officers are drawing a blank. Criminal psychologist Solly Brightman is off the case due to budget cuts. But Solly is more closely connected to the murders than he could possibly know . . . And as the hitman plans a bloody ransom to get his fee, the race is on to find out just who hired him – and who’s next on the hit list.

Detective Chief Inspector William Lorimer felt the swish of the plastic tape behind him as he entered the crime scene. He glanced at the house, one eyebrow raised in slight surprise. It was such an ordinary two-up, two-down mid-terrace, a modest suburban home, like thousands of others in and around this city in a district not particularly known for a high rate of crime. And certainly not for ones like this. But impressions could be deceptive, that was something he’d learned long ago, and as the Chief Inspector took another look around him his mouth became a hard thin line: scratch the surface of any neighbourhood and the veneer of respectability could expose all manner of human depravity.

The entire garden was cordoned off and a uniformed officer stood guard at the front gate, his eyes shifting only momentarily to the DCI. Lorimer turned to look behind him. Across the street a huddle of people stood, clearly undeterred by the driving rain, their curiosity or compassion binding them in a pool of silent anticipation. Three police vehicles lined the pavement, a clear sign of the gravity of the situation.

The incident had occurred sometime during the night yet the bright glare from a sun struggling to emerge from layers of cloud made a mockery of the situation. This was an ordinary Monday morning where nothing like this should be happening. He could hear the hum of motorway traffic several streets away as people headed to work, oblivious to the little drama that was about to unfold. A bit in tomorrow’s newspaper would command their attention for a few moments, perhaps, then they would dismiss it as someone else’s tragedy and continue about their business, glad that it didn’t impinge upon their own lives.

His business lay ahead, behind that white tent erected outside the doorway, keeping the scene free from prying eyes. Lorimer nodded, satisfied to see it in place. At least one journalist might be among that knot of watchers over the road, he thought wryly. Closing the gate behind him he ventured up the path then stopped. Someone had been violently sick out here, the traces of vomit splashed over a clump of foliage not yet washed away by earlier torrential rain. Whatever lay inside had been shocking enough to make one person’s stomach heave.

With a word to the duty officer the DCI let himself into the house, his gloved hands closing the door carefully behind him. The body lay spreadeagled on the hall carpet, the gunshot wound clearly visible in the artificial light. He was clad in thin summer pyjamas, the shirt open revealing his bare chest. Any traces in the immediate area would assist the scene of crime officers in learning a little more about the victim’s end, as would the bullet lodged within his head. For Lorimer, the story was one that seemed sadly familiar; a gangland shooting, maybe drug related. The single shot to the temple indicated a professional hit man at any rate, he thought, hunkering down beside the body.

‘What can you tell me?’ he asked, looking up at Detective Sergeant Ramsay, the crime scene manager, who hadarrived before him.

‘Well, so far as we can make out there was no call from neighbours about hearing a weapon being discharged.’ The officer shrugged as if to say that didn’t mean much at this stage. To many people, having a quiet life was preferable to giving evidence in a criminal trial.

‘The killer’s weapon may have been fitted with a silencer, of course,’ Ramsay continued, ‘or the neighbours on either side could just be heavy sleepers. We haven’t found a cartridge case, by the way,’ he added.
‘So who called it in?’ Lorimer wanted to know. ‘Colleague of the victim, sir. Was coming to give him a lift to work. Didn’t get an answer to the doorbell so he looked through the letterbox, saw the body . . . ’

‘Suppose that was the same person who was sick outside?’ Ramsay nodded.

‘Poor guy’s still shivering out there in the patrol car. Had to wrap a blanket around his shoulders. He’s been trying to give us what information he can.’

‘Okay. What do we know so far?’ Lorimer asked, looking at the dead man, wondering what his story had been, how he had been brought to this untimely end. The victim was a man about his own age, perhaps younger, he thought, noting the mid-brown hair devoid of any flecks of grey. For a moment Lorimer wanted to place his fingers upon the man’s head, stroke it gently as if to express the pity that he felt. No matter what his history, nobody deserved to die like this.

‘Kenneth Scott,’ the DS told him. ‘Thirty-seven. Lived alone. Divorced. No children. Parents both dead. We haven’t managed to get a lot else out of the colleague yet,’ he added, jerking his head in the direction of the street.

‘Too shocked to say much when we arrived. After he’d seen his pal.’

Lorimer continued to focus upon the dead man on the floor.
The victim’s eyes were still wide with surprise, the mouth open as if to register a sudden protest, but it was not an expression of terror.

‘It must have happened too quickly for him to have realised what was happening,’ Lorimer murmured almost to himself. ‘Or had he known his assailant?’

‘There was no forced entry, sir, but that might not mean all that much.’ The DCI nodded a brief agreement. Men were less likely to worry about opening their doors to strangers, if indeed this had been a stranger. And a strong-armed assassin would have been in and out of there in seconds, one quick shot and away. Lorimer sat back on his heels, thinking hard. They would have to find out about the man’s background as a priority, as well as notifying his next of kin. The pal outside had given some information. They’d be checking all that out, of course.

‘What about his work background?’ Lorimer asked.

‘They were in IT, the guy out there told us, shared lifts to a call centre on a regular basis.’ Lorimer stood up as the door opened again to admit a small figure dressed, like himself, in the regulation white boiler suit. His face creased into a grin as he recognized the consultant forensic pathologist. Despite her advanced state of pregnancy, Dr Rosie Fergusson was still attending crime scenes on a regular basis.

‘Still managing not to throw up?’ he asked mischievously.

‘Give over, Lorimer,’ the woman replied, elbowing her way past him, ‘I’m way past that stage now, you know,’ she protested, patting her burgeoning belly. ‘Into my third trimester.’

‘Right, what have we here?’ she asked, bending down slowly and opening her kitbag. Her tone, Lorimer noticed, was immediately softer as she regarded the victim. It was something they had in common, that unspoken compassion that made them accord a certain dignity towards a dead person.

Lorimer heard Rosie sigh as her glance fell on the victim’s bare feet; clad only in his nightwear that somehow made him seem all the more vulnerable.

‘Name’s Kenneth Scott. His mate came to collect him for work at seven this morning. Nobody heard anything last night as far as we know,’ he offered, making eye contact with Ramsay to include him in the discussion. This was a team effort and, though he was senior investigating officer, Lorimer was well aware of the value everyone placed on the scene of crime manager who would coordinate everyone’s part in the case.

‘Hm,’ Rosie murmured, her gloved hands already examining the body.
‘He’s been dead for several hours anyway,’ she said, more to herself than for Lorimer’s benefit.

‘Rigor’s just beginning to establish. May have died around two to four this morning.’ Rosie glanced up at the radiator next to the body. ‘I take it that’s been off?’

‘I suppose so,’ Lorimer answered, feeling the cold metal under the layers of surgical gloves. He shrugged. ‘It’s still officially summertime, you know.’

‘Could have fooled me,’ Rosie replied darkly, listening to the rain battering down once again on the canvas roof of the tent outside. ‘That’s two whole weeks since July the fifteenth and it’s never let up.’ Lorimer regarded her quizzically.

‘St Swithin’s day,’ she told him. ‘Tradition has it that whatever weather happens that particular day will last for forty days. Or else it’s more of that global warming the doom merchants have been threatening us with,’ she added under her breath.

‘But this fellow’s not been warmed up any, has he?’ Lorimer said. ‘Nothing to change the time of death?’ The pathologist shook her blonde curls under the white hood. ‘No. Normal temperature in here. Wasn’t cold last night either so we can probably assume it happened in the death hours.’ Lorimer nodded silently. Two until four a.m. were regarded as the optimum times for deaths to occur, not only those inflicted by other hands. He had read somewhere that the human spirit seemed to be at its most vulnerable then. And villains seeking to do away with another mortal tended to choose that time as well.

They’d find out more after Rosie and her team had performed the actual post-mortem and forensic toxicology tests had been carried out. Until then it was part of his own job to find out what he could about the late Kenneth Scott. 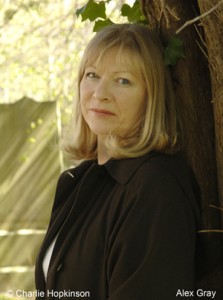 Alex Gray was born and educated in Glasgow. After studying English and Philosophy at the University of Strathclyde, she worked as a visiting officer for the DHSS, a time she looks upon as postgraduate education since it proved a rich source of character studies. She then trained as a secondary school teacher of English.

Alex began writing professionally in 1993 and had immediate success with short stories, articles and commissions for BBC radio programmes. She has been awarded the Scottish Association of Writers’ Constable and Pitlochry trophies for her crime writing.

A regular on the Scottish bestseller lists, her previous novels include Five Ways to Kill a Man, Glasgow Kiss, Pitch Black, The Riverman, Never Somewhere Else, The Swedish Girl and Keep the Midnight Out. She is the co-founder of the international Scottish crime writing festival, Bloody Scotland, which had its inaugural year in 2012.

Connect with her at her website: http://www.alex-gray.com or on social media https://twitter.com/Alexincrimeland

Thursday, September 21
Book featured at Confessions of an Eccentric Bookaholic