When terrified Elaine Patrick knocks on Driscoll Investigations’ door and insists her house is haunted, Giulia Driscoll’s first response is “we don’t handle ghosts.” When Elaine’s housekeeper and crackpot filthy rich cousin descend on Giulia and demand she find out who’s trying to steal sweet, fragile Elaine’s family business out from under her, that’s a different story. They want DI to provide Tarot readings, ghost hunting sessions, and even an exorcism.

Ghost hunting? There are apps for that. Tarot readings? Experts in the skill are right across the street. Exorcisms? Having a priest for a brother-in-law comes in handy. Giulia plunges into a crash course in all things supernatural, convinced everything happening to Elaine is stagecraft.

Except when it isn’t. Giulia’s about to discover a new dimension to sleuthing, if she can survive attempted murder long enough to see through the web of lies around her client. 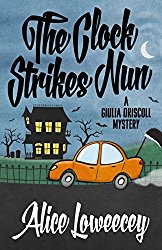 Giulia's at it again when Elaine shows up and asks for ghost-busting help with the underlying theme that someone or someones at the fashion design company is doing this to her now that she has taken over as CEO, with hints that one of the three key players may be stealing from the company. Elaine's a design genius but also an agoraphobic who is so motivated to get to the bottom of odd happenings at the house that she has ventured to find Giulia. The housekeeper, Cissy, who has been with Elaine since her parents were killed shows up as well and implores Giulia to help, as does Elaine's husband, Pip.

Giulia isn't exactly a believer of ghosts and definitely draws the line at ouija boards. She gets some help and is instructed to tune into her intuition. Between that and regular detective work she starts to get a sense of who might be behind the strange occurrences. An interesting ending to say the least. 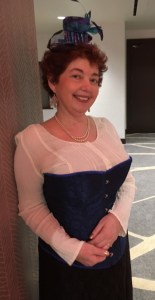 Baker of brownies and tormenter of characters, Alice Loweecey recently celebrated her thirtieth year outside the convent. She grew up watching Hammer horror films and Scooby-Doo mysteries, which explains a whole lot. When she’s not creating trouble for her sleuth Giulia Driscoll or inspiring nightmares as her alter-ego Kate Morgan, she can be found growing her own vegetables (in summer) and cooking with them (the rest of the year).