Blog Tour & Review: BETWEEN A ROCK AND A HARD PLACE by Debbie De Louise 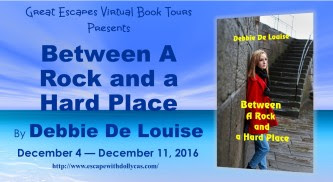 Librarian Alicia McKinney has put the past behind her…

Two years ago, Alicia discovered both a terrible truth and lasting love with John McKinney in the small town of Cobble Cove, New York. Now a busy mother of twin babies and co-author of a mystery series, Alicia couldn’t be happier.

Alicia’s contentment and safety are challenged…

Walking home alone from the library, Alicia senses someone following her, and on more than one occasion, she believes she is being watched. Does she have a stalker? When the local gift shop is burglarized, the troubling event causes unrest among Alicia and the residents of the quiet town.
John and Alicia receive an offer they can’t refuse…

When John’s sister offers to babysit while she and John take a much-needed vacation in New York City, Alicia is reluctant to leave her children because of the disturbances in Cobble Cove. John assures her the town is safe in the hands of Sheriff-elect Ramsay. Although Alicia’s experience with and dislike of the former Long Island detective don’t alleviate her concern, she and John take their trip.

The McKinneys’ vacation is cut short when they learn their babies have been kidnapped and John’s sister shot. Alicia and John’s situation puts them between a rock and a hard place when the main suspect is found dead before the ransom is paid. In order to save their children, the McKinneys race against the clock to solve a mystery more puzzling than those found in their own books. Can they do it before time runs out?

The small town of Cobble Cove is quiet and safe, but as the holidays move closer, first a burglary, and then Alicia and John's lights are vandalized.  The town thinks hiring a Sheriff will help maintain their safety, but the only candidate is Ramsay. Alicia isn't sure he truly has changed. Then the unthinkable happens.  But who in this small town could be burglar and kidnapper?  This is a suspenseful story with subplots that add to the tension. The resolution makes sense but is not obvious until the very end. Although the second in the Cobble Cove cozy mystery series, this can be read as a stand alone.

FTC Disclosure: I received a complimentary copy of this book. This has not affected the content of my review in any way.

Debbie De Louise is a reference librarian at a public library on Long Island and has been involved with books and writing for over thirty years. She received the Lawrence C. Lobaugh, jr. Memorial Award in Journalism for her work as Features Editor on the Long Island University/C. W. Post student newspaper, the Pioneer. More recently, Debbie received the Glamour Puss Award from Hartz Corporation for an article about cat grooming that appeared on Catster.com. She has published a short mystery in the Cat Crimes Through Time Anthology and two novels, CLOUDY RAINBOW

and A STONE’S THROW

, the first book of her Cobble Cove cozy mystery series. Her short stories, THE PATH TO RAINBOW BRIDGE and DEADLINE appear in the anthologies, REALMS OF FANTASTIC STORIES and PROJECT 9, Vol. 2 published by Solstice Publishing. She is currently working on a psychological thriller, the third Cobble Cove Mystery, and a new pet-related cozy series. She lives on Long Island with her husband, daughter, and two cats.