Today it's my pleasure to have Frankie Y. Bailey as my guest. She's provided a perspective on WHAT THE FLY SAW from the perspective of Detective McCabe's Little Black Dress...

I’m Detective Hannah McCabe’s Little Black Dress. You can call me LBD. McCabe bought me one day when she was out shopping with her best friend, Chelsea. McCabe needed a dress to wear to a police department dinner. Chelsea (who owns a vegetarian restaurant with her husband, Stan) is a smart shopper. She knows her zucchini, and she knows a classic LBD with great style when she sees one. She spotted me and insisted McCabe try me on. I’m sleeveless, a light wool blend, perfect with a jacket or sweater in fall/winter, a shawl in spring, and a necklace in summer.

On the evening of the police department dinner, McCabe looked lovely. She’d taken the time to go to a salon instead of twisting her hair into a curly knot on top of her head. The elegant chignon that the hairstylist came up with was perfect for me. But I had my first hint that the evening might not go well when McCabe paused right in the middle of stepping into me and just stood there for at least five minutes. Then she almost tripped over my hem when she tried to walk. She cursed and zipped me up and then grabbed her ORB to tag her partner, Mike Baxter. He was in the middle of pulling on his jacket, but he stopped what he was doing when she told him what she’d realized about their crime scene. The crime scene in their latest murder investigation.

After she’d finish her conversation with Baxter and rung off, McCabe was so preoccupied that she didn’t even glance in the mirror to admire herself in me. She just grabbed her purse and headed for the door. Well, first she put a gun into her purse. And then we headed for the door. When we got to the dinner at the hotel in downtown Albany, she didn’t even notice that she was turning heads wearing me. She barely acknowledged the compliments she received. She spent the evening looking around the room for whatever it was she was trying to see. And Baxter never showed up. And then we left, and we ended up in that horrible place. . .

Did I mention where I am right now? I’m on the counter at the dry cleaners. The woman behind the counter just told McCabe that they’ll probably be able to save me. I have blood and dirt and smells in my fibers. I was not designed to be worn under a protective vest while crawling.

McCabe usually treats me with more respect. She isn’t one of those TV police detectives who run around in high heels and silk blouses. She has sensible work clothes.

That evening, I had hoped that Ted Thornton, the billionaire industrialist, might be at the police department dinner. The mayor was going to be there. I thought Thornton might be, too. I was hoping McCabe and I might get invited back to his mansion. Of course, I did hear McCabe mention his Maine Coon, and it would have been really annoying to get covered in cat hairs. McCabe’s dog is bad enough. She and her father, Angus, adopted a puppy, a Great Dane mixed with who knows what. I’ve been terrified McCabe would forget when she was wearing me and let him get too close.

McCabe is about to leave me here at the dry cleaners. I hope they treat me more gently than she did. McCabe may feel called upon to protect and serve, but she also has an obligation to be careful of her clothing. Obviously, she never listened to those lectures her mother used to give her about being a “wild child.”

Well, to be fair, she really didn’t have the time to think about me. But, really. Blood? On her LBD?

Thank goodness this is the year 2020, and they have the technology to save me. Otherwise, I’ll be as dead as one of McCabe’s bodies.

Very interesting! Want to know a little more about WHAT THE FLY SAW? Keep reading...

Synopsis for WHAT THE FLY SAW

The morning after a blizzard that shut down the city, funeral director Kevin Novak is found dead in the basement of his funeral home. The arrow sticking out of his chest came from his own hunting bow. A loving husband and father and an active member of a local megachurch, Novak had no known enemies. His family and friends say he had been depressed because his best friend died suddenly of a heart attack and Novak blamed himself. But what does his guilt have to do with his death? Maybe nothing, maybe a lot. The minister of the megachurch, the psychiatrist who provides counseling to church members, or the folksy Southern medium who irritates both men—one of these people may know why Novak was murdered. Detective Hannah McCabe and her partner, Mike Baxter, sort through lies and evasions to find the person who killed their “Cock Robin,” But McCabe is distracted by a political controversy involving her family, unanswered questions from another high-profile case, and her own guilt when a young woman dies after McCabe fails to act.

Set in 2020, the story of Novak's death includes many twists and turns as projected to be possible in 2020. Obvious differences are evident in police procedurals, communication, zombie hippies, and the motive for Novak's death. Bailey injects some interesting, yet subtle reflections on life and mental health. Detective Hannah McCabe is a strong female character. Readers who enjoy a touch of fantasy/science fiction with their crime drama will enjoy WHAT THE FLY SAW.  This is the sequel to THE RED QUEEN DIES but can easily be read as a stand-alone. 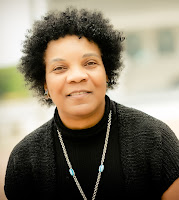 Criminologist Frankie Bailey has five books and two published short stories in a mystery series featuring crime historian Lizzie Stuart. The Red Queen Dies, the first book in a near-future police procedural series featuring Detective Hannah McCabe, came out in September, 2013. The second book in the series, What the Fly Saw came out in March 2015. Frankie is a former executive vice president of Mystery Writers of America and a past president of Sisters in Crime.

Purchase link for WHAT THE FLY SAW