Say hello to the next screwball Cue Ball!

At long last! Jessie Hewitt is about to take her rightful spot in the Hall of Fame. No, not the one for pool sharks. This is the Romance Writers Hall of Fame. Jessie's so excited she's even convinced über-hunky cop Wilson Rye to tag along for the induction festivities. But things don't go exactly as planned. How could a conference called Happily Ever After take such a wrong turn? Take a guess.

Review
Jessie (and Tessie) are back and in the world of pink at the Happily Ever After celebration where Jessie is to receive her cupid as Adelé. Penelope is poisoned but Jessie may have been the target. Wilson's protective side is engaged while tickets are being sold to be his Paramour for the day.

Jessie, Tessie and Wilson alone guarantee some laughs while trying to solve a murder. Add in the Glee club and the two book agents fighting over deals, and the other three award recipients and spouses...  For a cue-ball mystery, there isn't very much pool, but there is definitely conflict, humor, and crazy fans, at this Romance Writers Meeting and not everyone is in love with the "pink" people.

As for the mystery, lots of choices for the killer. The unique characters, their idiosyncrasies, and even their names add to the humor and plot.  The sleuthing team is fantastical! The story moves along at a quick pace. On a more serious note, I didn't figure out the whodunit, but the ending did make sense when revealed.

Although part of the series, you can read this as a stand-alone. If you've read the others and loved them, you'll enjoy this one as well. If this is your first read by Blackburn, keep in mind that screwball mysteries aren't everyone's cup of tea (or Korbel) so be prepared for some fun rather than suspense in this cozy mystery. A fantastical, fun read! 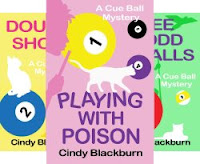