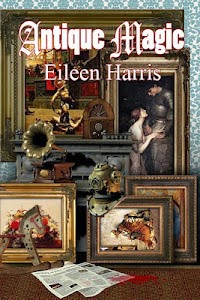 Antique dealer Alicia Trent is hired to appraise a huge collection of treasures hoarded by a woman who has recently died in the town where Alicia grew up.

The huge old house poses mystery after mystery from the moment she arrives, but the stakes become deadly when murder is added to the mix. The question then becomes, can she stay alive long enough to unmask the killer?

Review:
As Ali takes on the job of cataloging all the antiques and "stuff" that Mrs. Hall has accumulated over the years is a massive undertaking in itself.  Add to that the gnawing sense that something about her death might be questionable, the many books on magic, the mysterious tunnels and apartment, and Ali's natural curiosity, and it's easy to get hooked.  The two nice looking men, Dan and Nick, add a little spice to the story, along with Naomi's great cooking.  Ali's a little too down to earth for magic, but some things can't be explained. Well written, with likable characters and expected as well as unexpected twists and turns. I'll be looking forward to more of Ali's mysteries.

Without consciously making a decision to do so, I grabbed my robe and headed for the door. If the thief was in the house, it might be my chance to identify him or her. One last glance at the globe showed the black was now mixed with a lot of orange. It looked like a Halloween decoration.

I turned off the light in the room, then quietly unlocked and opened my door. A flashlight would be a big help, but mine was packed in my suitcase. This was the first time I’d needed it. I eased out into the dark hall. A nightlight plugged in at the top of the stairs made a dim glow and I started in that direction. Moving slowly, I listened intently for any unusual noise. Everything seemed quiet and peaceful. I didn’t think anyone had stayed overnight in the house except Naomi and me. The stairs were solid and didn’t make a sound as I crept down. Time moved in slow motion and it seemed to take forever to reach the bottom. Once there, I began making my way to the living room. We always turned off the electronic security on that door at night since there were no potential buyers coming in and out after five. Even though I still hadn’t seen anything suspicious, somehow the atmosphere seemed wrong. Danger seemed to lurk in every dark corner. I was anxious to make sure the items displayed for viewing hadn’t been disturbed. Moving into the room and closing the door seemed to take forever. I couldn’t wait to get the light turned on. At first glance everything looked fine. Walking around the items for a closer look, I still didn’t see any evidence of tampering. Maybe I was overreacting and chasing ghosts. I decided to return to my room, but instead I veered into the study for a quick look. I wasn’t quite ready to admit my fears were just my nerves playing tricks. This time I hadn’t done the smart thing and called for Dan. He had to be tired of my crying wolf and not finding any evidence. I’d need a darn good reason before choosing to disrupt the entire household again.

At first the study also seemed undisturbed, but as my eyes adjusted, my heart skipped a beat. Someone had pushed the button that moved the desk aside. The light on the stairs leading down into the passageway had been turned on. Someone had entered the house, but I couldn’t call Dan from here and didn’t want to lose the chance to discover the identity of the intruder. All of a sudden my policy of not crying wolf didn’t seem so wise. I picked up a large letter opener from the desk and started down the stairs. The cloying feeling of danger increased with each step. The second bookcase on the left hand side of the hall was moved aside, revealing a passage I hadn’t known existed. The walls in this new passage were lined with artwork. Creeping silently along, I noticed that the art consisted of a variety of styles. At a quick glance I saw pen-and-ink, charcoals, watercolors and oils. I wouldn’t know what all was there until I had time to investigate. Right now my attention was focused on finding out who was down here and why. The passage climbed steadily upward. There didn’t seem to be any side doors, at least none that were obvious, until the end of the passage. Here one door opened to the right. By now my sense of direction had become confused and I wasn’t sure what part of the house this passage ran through, but it might be somewhere on the second floor.

From living off the grid in the Arizona desert, Eileen has moved to the woods of upstate New York. She has authored a standalone adventure novel called Desert Shadow. She is also the author of Alicia Trent Series. The Black Cane : Dowager Diaries Book 1 is her latest release.


Stalk The Author
Blog I Facebook I Goodreads I Amazon